Though it also concerns the friendship formed by Brown and white wingman Tom Hudner (Glen Powell, also an executive producer on the picture), the film also subverts previous cinematic pairings between Black folks and white people during segregation: “Green Book,” “Driving Miss Daisy,” “The Defiant Ones,” which are steeped in stereotypes and proliferated with magical Negros who have the power to end racism if only their white counterpart could see their humanity. These films, of course, posit the prejudiced white person as a kind of hero, while othering the person it claims to care about. “Devotion” walks the tightropes between discord and harmony, hard lessons and heroic triumphs, and full-throated allyship and useless white guilt with aplomb.

Dillard’s film opens in 1948 with Hudner’s arrival at the Naval Air Station Pensacola in Pensacola, Florida. He enters a cacophonous men’s locker room populated by wrathful slurs. These vulgar barbs are not emanating from a mob. They’re coming from one man: Brown. Hudner never sees Brown shouting at himself, as the tears this Black man sheds aren’t for Hudner (though Dillard and cinematographer Erik Messerschmidt do show us those tears through an arresting fourth-wall-breaking mirror shot). The calm, naive, all-American Hudner casts a different shadow from the quiet, reclusive, no-nonsense Brown. In terms of temperament, they shouldn’t be friends. Screenwriters Jake Crane and Jonathan Stewart don’t try to force the issue either, which gives “Devotion” uncommon freedom. Instead, this thrilling, pulsating journey is more concerned with the two men forming a bond through shared respect rather than a fantastical misunderstanding of the place and time.

Brown is an aviator with so many unseen wounds; The obscenities he yells at himself spring from a little book where he keeps every slur that’s ever been hurled in his direction. One of the Navy’s first African American aviators, Brown experienced bodily harm and several attempts on his life from his segregationist “comrades” in his early career. We don’t see the violence that Brown endured. Dillard is too smart for such low-hanging fruit. We instead witness the repercussions on Brown’s psyche through Majors’ adept physical performance, a tight bundle of a swaggering gait belying the weight on his broad shoulders and tension wrapped around his face.

“Devotion” chronicles the steady progression Hudner makes toward understanding Brown without infantilizing this proud pilot. Brown, in turn, slowly brings Hudner into his orbit and we’re introduced to Brown’s daughter Pamela and his devoted wife Daisy (Christina Jackson). Dillard juxtaposes this home life—where Brown can leave the pressures and racism, where his entire frame and visage lightens with joy—with the difficult landscape of being the only Black man in a sea of white naval aviators. Jackson is a burst of jubilant air as Daisy, offering the picture some much-needed levity and grace. And in many ways, the bond shared by Daisy and Jesse, more so than desegregation or war, provides the picture with a palpable heartbeat.

But conflict does come: The Korean War sends Brown and Hudner and their squadron to a carrier bound for the Mediterranean Sea. Their deployment requires the pilots to train on the F4U Corsair, an aircraft that worries Brown. The drilling on these planes becomes a tad repetitive mostly because the difficulties, even though Brown feels them, can be too technical for a general audience goer (though I’m sure aviation nuts will love these details).

The aerial dogfights in “Devotion” are simply thrilling. Many people will immediately compare this Korean War flick to “Top Gun: Maverick,” but “Devotion” stands on its own. It’s an immersive experience where the roar within the cockpit thrills; the cinematography by Messerschmidt (“Mank”) firmly establishes us in the dimensions of the skirmishes; the editing by Billy Fox (“Dolemite is My Name”) is tightly wound to gripping ends.

For Dillard, Brown’s fight against racism on the ground continues in the sky, where the pilot finds his greatest freedom. In this picture, there is no visible physical violence against Black folks as a means for civil rights or to be seen as human by Hudner. Brown’s existence is his protest. His plane is his sit-in. A two-and-a-half-hour film that literally flies by, “Devotion” is a graduation of sorts by Dillard, from his compact genre film canvas to a spectacular large-scale onslaught. Dillard manages to balance the several concerns of anti-racism movies with the heroism of Brown without succumbing to maudlin, craven techniques. Even toward the aching end, “Devotion” manages a perfect landing.

Only in theaters today, November 23rd. 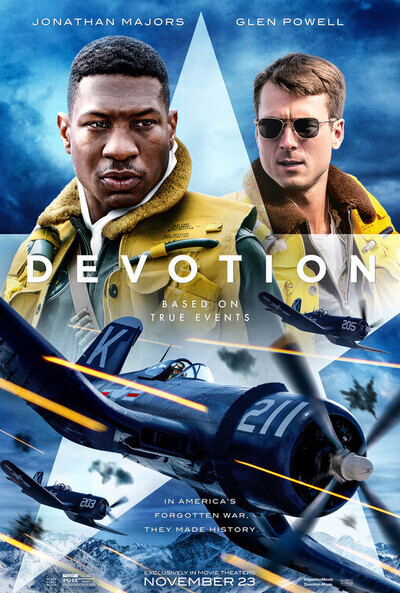 Rated PG-13
for strong language, some war action/violence, and smoking.

Writer (based on the book by)