“Meet Cute,” or “Live. Date. Repeat.” as I’m calling it informally, wastes a good time machine. With the bright flash of a blue light from a tanning bed, made by New York City nail salon owner June (Deborah S. Craig), one can be transported back in time for 24 hours. There’s so much that can be done, and June seems pretty open to letting anyone just walk in and use it. It’s a bummer that “Meet Cute” sticks us with such a ho-hum date.

“Meet Cute” is a failed experiment of a time travel story, starting with how its titular moment and subsequent date rarely captures our imagination. Sheila (Kaley Cuoco) has stumbled across a time machine in a tanning bed at a nail salon, and she has been using its limited ability—only 24 hours in the past or future—to revisit a date with Gary (Pete Davidson). The date usually starts the same, with her approaching him at a bar, urging him to ditch the place and walk through the city to get dinner. She usually has a line about her father being a “traveling alcoholic,” and he makes a “Sophie’s Choice” aside when it comes to picking a restaurant.

But the way the date ends can be a toss-up, especially when Sheila becomes more and more serious about being from the future, which he initially takes as a flirtatious joke. Sheila gets fixated with this connection, and sometimes she goes through the dates as if she wants to weird him out off the bat, telling him how long she has “known” him, even though it’s their first meeting. This fateful night, repeated with different variations because of some desperation that doesn’t come into genuine form, is the film’s main spectacle.

Director Alex Lehmann has an eye for some opulent NYC dating spots—the two are covered by shimmering lights inside the Bangladeshi restaurant they always end up at—but their two-hander moments walking down the street create a bland intimacy. On a larger scale, “Meet Cute” doesn’t convey enough of the magic that its most intense character becomes addicted to, and despite Lehmann’s quick cuts and some dry humor from the original script by Noga Pnueli, there’s not much total charisma. Their date, however impromptu, just doesn’t have that certain zing of romance to wish we were on it, or had it, or could have it.

Kaley Cuoco’s inner electricity powers much of this entire production, and it’s clear the shortcomings in her character and plot are not from the performance, but the script that gives us a challenging character but treats it too broadly. As she is written, Sheila is supposed to be pushy, electric, desperate, manic—she’s supposed to be too much. She’s also supposed to be a lot of dangerous, given how she has to kill her previous self when she steps back 24 hours to avoid a “Highlander” thing. Cuoco gets this all across well, and the performance is good for what it is. Next to her work in “The Flight Attendant,” one can appreciate how much she’s venturing to wilder, more freewheeling parts.

But “Meet Cute” constantly is weighed down by one particular rhetorical question—it’s all for this guy? Almost like a joke from the script, Sheila’s fixation on Gary becomes ridiculous, and Davidson’s flat performance doesn’t make any more of a case to see what Sheila sees. They have decent enough chemistry in the different repeated chapters of this first date, but Davidson seems lost in how to handle this character without being monotone or too laid back. He’s relatively lifeless in the role, as if he were more here to fill in the New York-related scenery.

Only after its initial curious charm has worn off, does “Meet Cute” venture to how the time machine could be used to change the dating partner, and not just how they felt about you at the end of the night. It’s a general way of getting to how our partners come from previous formative relationships, but it’s too late, and it’s certainly too little. It might have been more rewarding for the story to show us more about what else Sheila has been doing while in the past, including killing an evil figure named “Smitson.”

“Meet Cute” then winds these ideas about changing someone to make some pretty disingenuous emotional bids in its third act, to assemble a hollow message about choosing life because of a relationship. No, not even a relationship, a first date. With Gary. The romantic fantasies and the time travel plotting of “Meet Cute” are a total mismatch. 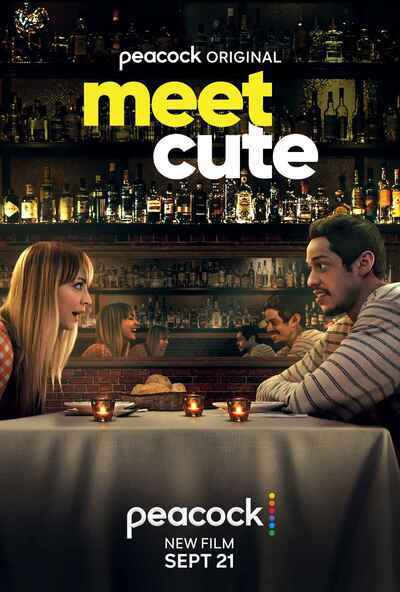