Hollywood’s output of American immigrant plotlines is endless. Yet while many of them are no doubt empathetic films, they also contain a sense of distance. Whether it’s in a film’s decades-ago period or a focus on the external forces that other its characters, rather than their interiorities and inner thoughts, this particular subject of film can tend to focus on what happens to people, rather than sitting with them in the transient moments of everyday experiences. Nikyatu Jusu’s debut feature “Nanny” takes the trials, pains, and pursuits of the American immigrant experience and forms a narrative deeply and vitally entrenched in the mind of its lead character.

The film follows Aisha (Anna Diop), a Senegalese woman working as a nanny for a young girl, Rose (Rose Decker), the daughter of a rich white couple (Michelle Monaghan and Morgan Spector) in New York City. Having recently moved to America, Aisha is not only building a life for herself in a new country but also working to save the money to bring her young son overseas as well. There’s a poignant feeling of loss in the film, contrasted not by the gain of a new home, but the newness of one.

“Nanny” is visually striking, especially in its use of color. Scenes of Aisha at her home, swathed in saturation and patterns, greatly oppose the cold, brutalist architecture of the couple’s apartment and the city around it. Her bright head scarves and occasional donning of traditional clothing are a signal of warmth, remembrance, and the culture she’s carried with her to the states. The lighting of the film renders Black skin beautifully, whether in its daylight scenes or punchy surrealist sequences.

There’s a water motif that plays into the use of light and color beautifully, but if used more sparingly, would receive more appreciation. Water is irrevocably tied to Aisha’s state of mind as both a physical representation of distance and a conceptual metaphor for drowning, but these water-based sequences occur so often that by the third or fourth time their impact is diminished. With tighter editing and a stronger discerning hand, these moments would feel more like statements rather than crutches.

The film’s horror elements feel not only hindered by budget but overall apathetic. “Nanny” has a great, atmospheric score, and it would have sufficed in building tension without the inclusion of poor-CGI moments that completely interrupt the film’s otherwise solid cinematography. If “Nanny” was less focused on checking the box of “horror” and instead just committed to its successful surrealist tone, it would have felt more seamless. Saving the horror elements for the latter part of a film is not an ineffective strategy, but in “Nanny” they feel noticeably out of place. The impression they leave is fleeting, and the majority of these moments feel thrown in or confused, much like the movie’s organization.

“Nanny” never quite finds its track among its list of narrative events. Time jumps, mood shifts, and side characters are messily included and distract from the film’s central focus (and strength): Aisha. She is displaced and at the whim of many external factors but has shamelessness and unshaken confidence despite her social position. Aisha is unconcerned with how she is perceived, and never loses sight of herself, her son, her culture, or her goals, despite how persistent the couple is in making her life dependent on their own. Diop’s portrayal is versatile, moving, and powerful in its acuity. She absorbs the tide of the horror elements, not letting them wash over the impact she brings to their space.

But Jusu’s script spends far too much time planting seeds of interest in characters that end up unfulfilled. We are teased by their interiorities, and “Nanny” often loosens its grip on Aisha to shallowly explore side characters that don’t deserve our interest. The film’s thesis is unquestionable, but its power is anchored in Aisha’s mind and heart. When it pivots from that center, every moment is spent waiting to return.

“Nanny” is a somewhat-cohesive slice-of-life psychological horror film. While its horror elements and overall structure lack gratification, it’s the woman at its center and the submergence into her spirit that make it a poignant, wonderfully personal character study.

Now playing in theaters and available on Prime Video on December 16th. 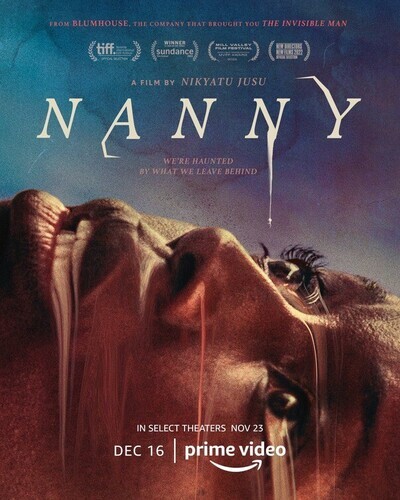 Rated R
for some language and brief sexuality/nudity.