“Railway Children” is touching and beautifully produced, but fans of the 1906 E. Nesbit book and the 1970 film need to know that there’s only the most vestigial connection to this latest film, which barely qualifies as “inspired by.” There are children and there is a railway and someone who is unjustly accused. The most significant consistency is the lovely actress Jenny Agutter, who appeared as one of the children in the 1968 mini-series and again in the 1970 film, the same character as a mother in the 2000 version, and the same character as a grandmother of one of the children in this one.

The setting has been moved from Victorian times to 1944, near the end of World War II. The storyline is very different, and a new character has been added, a Black American GI named Abe. His arc is so clumsily constructed and resolved, at the same time both under- and over-written, that even the very appealing Kenneth Aikens cannot make it work.

The story opens at a Manchester train station. The Nazis are bombing English cities and parents are sending their children to the Yorkshire countryside to keep them safe. The children are confused and scared, and parents are trying to comfort them. One mother sobs and snatches her child back from the train because she just cannot bear for them to be separated.

Lily (Beau Gadsdon), a brave and resilient teenager, promises her mother she will take care of her dress-hating sister Pattie (Eden Hamilton) and their teddy-bear toting young brother Ted (Zac Cudby). When they arrive in Yorkshire, local families are told to pick the whichever children they are willing to take home. No one wants the three siblings who won’t be separated. Bobbie Waterbury (Agutter) persuades her daughter Ann (Sheridan Smith), the school headmistress, to take them. Her kindness makes the newcomers feel at home and they quickly bond with Ann’s son, Thomas (Austin Haynes). The children miss their mother. But they enjoy exploring the country with its fresh air and unobstructed starry nights. And they enjoy exploring the railyard, where Thomas has set up a secret headquarters for spying that he insists is helping the war effort.

That is where they discover Abe, who tells them he is an American GI on a secret mission. In the grand tradition of “Great Expectations,” “Whistle Down the Wind,” “The Parts You Lose,” and others, he needs their help. He has been wounded. Lily agrees to bring him some bandages and he earns her trust by saving her when a bomb lands near them.

The setting, with many of the same locations from the first film, is used effectively; the peaceful, bucolic beauty of the countryside contrasts with the war news and underscoring the children’s adaptability and resolve. Kit Fraser’s cinematography has touches of nostalgic sepia in its color palette to evoke the past. The young actors give sensitive, moving performances, especially Gadsdon. Casting directors: put her in a movie with Thomasin McKenzie playing sisters who solve crimes or commit (not too serious) crimes. A sure hit.

There is nothing wrong with updating a classic story. But the storyline about Abe does not work nearly as well as the scenes of the children getting used to their new environment, responding to bullies, exploring, and coming to terms with a war that they cannot fully understand but accept because it’s all they’ve ever known. Abe’s situation is more compromised than it should be to provide the emotional weight the movie wants it to have.

Abe’s character is based on real-life conflicts between Black and white GIs when the military was still segregated but found itself in a country that refused to accept Jim Crow rules, keeping Black soldiers out of bars and restaurants and sometimes abusing them severely. It’s a weighty topic that deserves more thoughtful treatment than a chase scene and a contrived resolution that includes a child’s unforgivably dangerous stunt being portrayed as heroic. The denouement is so rushed that “Railway Children” requires three mid-credit scenes to resolve everything that is left. It is a disappointing ending to a film that begins with great promise, and, more significantly, a disappointing treatment of an issue that deserves better. 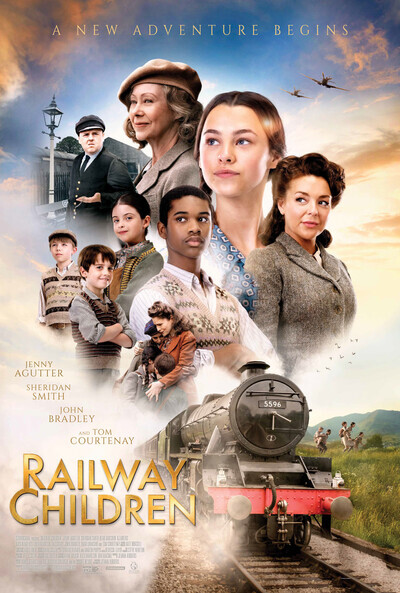 Rated PG
for thematic material, some violence and language.