All the basic elements of “Strange World,” Disney’s latest sci-fi/fantasy flick, are familiar. There’s a family of adventurers, a dire mission to save the planet from a mysterious ecological crisis, an absent father, three generations of insecure men, and a bunch of under-developed female supporting characters whose placeholder personalities range from strong to loving. It’s “Avatar” meets “Fantastic Voyage,” and it also looks really good on a big screen thanks to Disney’s many, many talented animators. With their help, “Strange World” breezes through a checklist of formulaic plot points and canned emotional revelations with enough style and sensitivity to make it work.

“Strange World” is the latest collaboration of co-directors Don Hall and Qui Nguyen, who previously worked on “Raya and the Last Dragon” with Hall’s co-directors, Paul Briggs and Carlos López Estrada. It’s always hard to know how to praise collaborations of this scale and nature, but Nguyen’s solo writing byline on “Strange World” stands out, and so does his co-director credit (this is his debut feature). Hall’s no slouch either; his name, on recent Disney successes like “Moana,” “Big Hero 6,” and “Winnie the Pooh,” also seems noteworthy.

After “Raya and the Last Dragon,” “Strange World” feels like a lower-stakes, and therefore more comfortable, union of Hall and Nguyen’s talents. These guys have clearly seen and maybe even studied the Disney cartoons that defined the company’s ‘90s animation renaissance. (Seriously, have you seen “Big Hero 6”?). So it’s nice to see that, with “Strange World,” they’ve found a project that brings out the best of their combined talents and doesn’t just feel like it was focus-grouped to death.

“Strange World” zips along with an easy pace that makes up for its lack of dramatic tension. Stubborn explorer Jaeger Clade (Dennis Quaid) abandons his insecure son, Searcher Clade (Jake Gyllenhaal). Searcher wants his dad to follow his lead for once, and, in this case, pay attention to a mysterious green plant that he calls Pando, but Jaeger dismisses both Searcher and Pando. Twenty-five years pass in the blink of an intertitle after Searcher leaves his fellow adventurers to find the outer limits of Avalonia, the Clades’ isolated mountain valley home. In that time, Searcher has become Avalonia’s hero, since they’ve adopted Pando as the town’s main power supply. Searcher’s a Pando farmer now and his world mainly revolves around his crops and his family: his loving aviator wife Meridian (Gabrielle Union), his easily-embarrassed teenage son Ethan (Jaboukie Young-White), and Legend, their three-legged dog.

When the Pando crops are not yielding the electrical charge that they used to, Callisto (Lucy Liu), one of Jaeger’s old explorer buddies, asks a reluctant Searcher to help her find out. And he does, with his wife and son in tow. Together, they descend into a big hole in the ground, where they discover a vibrant, Pandora-like world filled with various creatures, plants, and other sentient fauna that look like they were traced from old biology textbook illustrations. They also quickly stumble upon Jaeger, who now lives among the amoeba forests and acid rivers. He and Searcher play catch up while Searcher chases after Ethan, who’s always a few steps ahead.

As you might expect, the Clade men do not see eye-to-eye, nor do they work well together as a team. Their creators thankfully avoid several clichéd power dynamics, though they tiptoe up to a few of them along the way, like when Jaeger asks Ethan about his love life and mercifully doesn’t bat an eye when he discovers that Ethan likes a boy named Diazo. Searcher’s parents already know and accept their kid for who he is, and their affectionate concerns always err on the right side of heavily telegraphed sentimentality. Their dialogue appears to have been polished and rewritten without also being sandblasted down to bland talking points.

The same is true of the animation and general direction of “Strange World,” which flies from one action and chase scene to the next. Quaid and Gyllenhaal stand out among the strong ensemble voice cast, but the animators make what could have been a paint-by-numbers genre exercise look good enough to gawk at. They commit to a sort of lavishly rendered paperback novel/matte painting surrealism and pack the camera’s frame with flocks of magenta pterodactyls, forests of pastel coral, and oceans of multi-colored tentacle grass.

There’s something to be said for a kid-friendly cartoon whose main appeal isn’t its creators’ out-of-the-box thinking, but rather their crew’s thoughtful execution of otherwise shopworn ideas. That doesn’t seem to happen often enough with Disney’s recent animated movies, which help make “Strange World” feel like an exceptional triumph of execution over ingenuity. You could do a lot worse.

Only in theaters today, November 23rd. 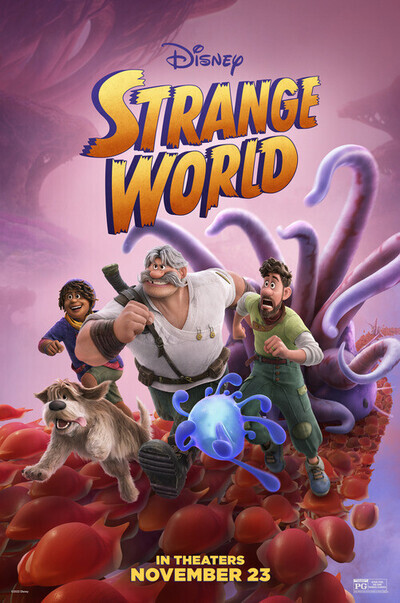 Rated PG
for action/peril and some thematic elements.