Any art student knows the dread of sitting in front of your professors to dissect and defend your work. The opening scene of “The African Desperate” amplifies this discomfort to 11, as Palace (Diamond Stingily) sits before her four white professors as they spout critiques riddled with obtuse language.

The professors then begin a pissing contest of artistic grandiosity, all while Palace awkwardly tries to keep her head above the waters of their interrogation. This pace is maintained both thematically and symbolically throughout the rest of the film as we follow Palace in her final days on campus after wrapping up her MFA and facing her return home to Chicago. Martine Syms’ directorial debut “The African Desperate” is a coming-of-age story, a search for stability and identity after the security of school is lost.

No student in the film seems to feel quite as displaced by their graduation as Palace does. With her being the only Black woman in the film, introduced in a scene where white academia is focused more on invading her identity than analyzing her work, we’re immediately faced with the confined feeling that comes with being a Black artist in the fine art sphere.

Palace is wonderfully portrayed by Stingily. With the majority of her moments trademarked by a deadpan delivery, any emotional breaks are made all the more impactful as she encounters her emotional trials and tribulations. Stingily’s performance is tangible; her gruffness and prickly sarcastic humor are reminiscent of someone we know.

The supporting cast, Palace’s friends Aidan (Cammisa Buerhaus) and Hannah (Erin Leland), as well as a sort-of love interest, Ezra (Aaron Bobrow), possess a similar emotional quality. They’re believable, each encompassing (to a distinct degree) various archetypes of art school students. Given that the actors are all working artists themselves, the strength with which their performances hit close to home is not only personal, but effectively feels so. Their roles perfectly serve to highlight Palace’s character. After all, this film is Stingily’s stage.

“The African Desperate”‘s experimental soundtrack emphasizes its pacing, and maintains the film’s style in its more understated visual moments. In a party scene where Palace is DJing, the discordant rhythms and melodies she spins spotlight her battle to upkeep her own emotional equilibrium. It’s in sequences like these that Syms showcases her masterful consideration of a harmonious or jarring moment. No moments or elements are wasted; Syms’ hand is felt in every scene.

The film rests on a foundation of a chaos and calm, as reflected in its cinematography. At times, its warm, faded glow evokes vintage photographs or impressionist paintings with modern subjects. Picturesque, romantic shots are like a breath of fresh air, only to be immediately followed with cold, off-kilter framing or the contrasted intensity of a world thrown under black light.

Martine Syms has a singular voice, flowing with creativity. Using her own background as an artist, Syms has taken artistic academia and the whiplash of exiting the comfort of school and churned it into a jungle juice of weed, ketamine, and self-discovery. 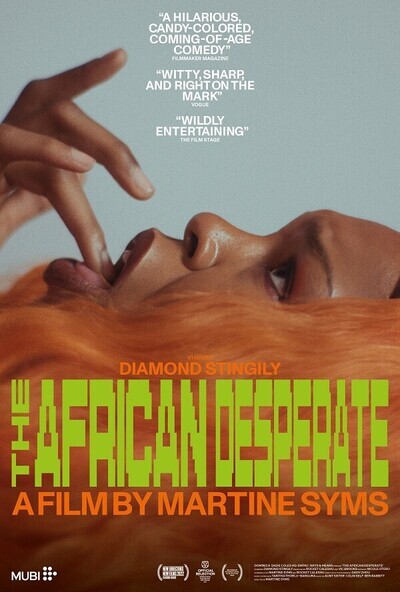