Abigail Disney is the granddaughter of Walt Disney and one of a seeming handful of well-off Americans who can regularly be seen on social media and television saying that people like her should be taxed more. Disney also thinks the executives at the company founded by her grandfather (Walt Disney’s brother Roy) should be taxed more. She thinks corporate executives make too much money, and that the money they make is at the expense of workers like the ones at the theme parks that the Disney corporation is known for.

“The American Dream and Other Fairy Tales” is a documentary by Abigail Disney, co-directed with “Armor of Light” co-director Kathleen Hughes. Like a lot of documentaries made in the last three decades, it has a bit of a Michael Moore feeling, with the filmmaker doubling as questing hero, standing up for the little guy and taking the fight to the suits. Disney, of course, benefited mightily from the economic success of the company her father and uncle co-founded together, but has spent the past few decades becoming increasingly alarmed at the widening gap between the haves and have-nots. As she points out here, the presidents of major corporations once made anywhere from a hundred to five hundred times as much as their lowest-paid employees. Now we see executives making hundreds of millions or even billions of dollars from salaries, stock deals, and other arrangements, while some of their employees are just scraping by.

In her quest to illuminate the income gap, Disney visits a group of Disney World employees who sit in a circle (it looks like a recovery group meeting in the basement of a church) and tell their stories. She asks them to raise their hands if they or any fellow Disney employee they know has ever gone without necessary medical care because they couldn’t afford the out-of-pocket expense. Hands go up. Then she asks them to raise their hands if they or anyone they know has ever lived out of their car. More hands. No matter what disturbing scenario she envisions, hands always go up. Some Disney theme park employees have to work two jobs just to afford rent: one woman works a shift at Disneyland and another one at Knotts Berry Farm, and the family still can’t make ends meet.

As a host and camera subject, the filmmaker is affable enough and makes her case well but isn’t dynamic enough to carry the film; it might’ve been better to concentrate on her interview subjects and on illustrating the problems she’s concerned with, as there are points where the movie edges a little bit too close to feeling like a long episode of a broadcast network newsmagazine. Still, this is a compelling story about persistent problems that affect the majority of Americans, even though you don’t hear about them very often in mainstream media. The blunt title says it all. 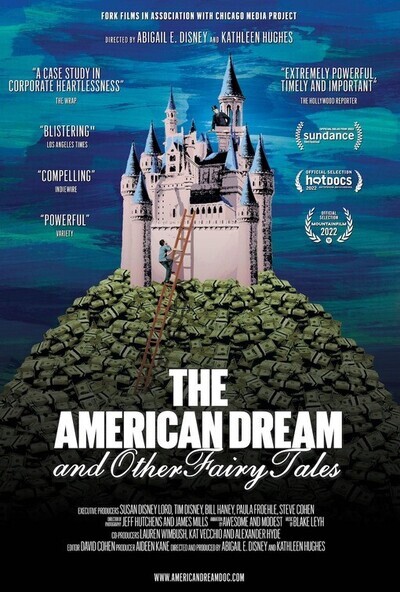 The American Dream and Other Fairy Tales (2022)

All the Beauty and the Bloodshed – New Movie Review