The Fabelmans are a middle-class Jewish family living in various cities in the middle of the 20th century. Steven Spielberg’s film about them centers on the conflict between artistic drive and personal responsibility. And the mysteries of genius and happiness, or, more accurately, what those words mean.

The matriarch, Mitzi (Michelle Williams), is a former classical pianist who became a homemaker. The patriarch, Bud (Paul Dano), is a scientist who works for various tech companies and likes to shoot home movies. One night, Mitzi and Bud take their eight-year-old son Sammy (Mateo Zoryon Francis-DeFord) to his first theatrical film experience, “The Greatest Show on Earth.” It ends with a spectacular train crash that was created with miniatures. Sammy becomes obsessed with the sequence and asks for a train set, which he crashes in an attempt to recreate the scene, infuriating his father, whose takeaway is that Sammy doesn’t appreciate nice things. The mother suggests that the boy shoot the trains crashing with his father’s movie camera so that he can watch one crash over and over instead of bashing the trains until they fall apart.

Sammy is a prodigy, and possibly a genius. Mitzi can tell that from watching the boy’s first film, which employs multiple, dynamic angles to capture the crash, and uses editing to build suspense and set up visual jokes.

But this is not just a movie about somebody who’s already good at something and gets even better at it. It’s about the difficulty of marriage, parenting, and being somebody’s child. It’s about the mystery of talent, an idea that’s explored not just through the central trio of Sammy, Mitzi, and Bud (who has real talent as a scientist and engineer) but through a secondary character, Bill’s best friend Benny Loewy (Seth Rogen), who is around their house so much that he’s a part of the family. It’s immediately apparent to the viewer that Mitzi is more attracted to Benny than to her husband, who can be blandly controlling at times but is a good enough mate and father. Benny is a naturally gifted partner and parent who knows how to help other people be happy; he’s as good at these things as Bud is at science, as Sammy is at filmmaking, and as Mitzi was at performance until she gave it up.

Where does talent come from? It’s not just in the genes, the psyche, the conditioning, or the trauma. It’s mysterious. It arrives out of nowhere like the shark in “Jaws,” the UFOs in “Close Encounters of the Third Kind,” the miracles and disasters of “War of the Worlds” and the Indiana Jones and Jurassic Park movies, and the eruptions of gore and cruelty in Spielberg’s R-rated historical epics. Sammy’s Uncle Boris (Judd Hirsch), an actor and storyteller, lays it out for him one night: people who know that they have talent have to commit to it, but the more they commit, the more they neglect their loved ones or feel as if they are. This conflict will wrestle inside the artist forever. Is it possible to fully commit to your talent without neglecting your loved ones?

From an early age, Sammy quickly figures out—or perhaps just instinctively knows—that a camera can be used not merely to create work while perfecting the artist’s skills, but to win friends; placate or manipulate enemies; woo prospective romantic partners; glamorize and humiliate; show people a better self that they could aspire to become; give the artist a bit of emotional distance at difficult moments; smooth out or obstruct the truth, and blatantly lie.

Sammy continues to refine his skills through adolescence (which is when a thoughtful and subtle young actor named Gabriel LaBelle takes over). He gets better filmmaking equipment that can do more things. When he makes a Western with a bunch of neighborhood kids, he figures out from looking at the way his mother’s high-heeled shoe punctured a piece of sheet music on the floor that he can punch holes in the strips of film to make it seem like the boys’ toy guns are firing blanks, like in a real movie. Sammy directs a World War II combat film starring his fellow Eagle Scouts, and it wins him a merit badge for photography.

Then Bud moves the family to California. He and his sisters are seemingly the only Jewish kids in a school populated by tall, conventionally good-looking WASPs, some of whom torment the young man because of his faith. His parents get divorced for reasons that are at once simple and complicated. Sammy ultimately ends up going to Hollywood, where he hates college, but it’s OK because CBS ends up hiring him as an intern. “The Fabelmans” quits before it can get to the now-legendary story of Spielberg directing Joan Crawford in an episode of “Night Gallery” at age 19 but substitutes a moment just as thrilling: Spielberg’s brief meeting with one of his directorial heroes, John Ford (played in a masterful stroke of casting by David Lynch) who takes nearly as long lighting a cigar as he does speaking to his visitor.

Of course, there’s more to Spielberg’s personal story. But this is a movie, and movies can’t encompass everything more than books or plays can. Spielberg and his co-writer Tony Kushner (who worked with Spielberg on “Munich,” “Lincoln,” and “West Side Story”) avoid the fundamental mistake that hobbles so many film biographies (and autobiographies), which is to try to cram every single moment that people might’ve heard of elsewhere into two-plus hours, making it impossible to linger on any one thing. Kushner and Spielberg (taking his first screenplay credit since “A.I.”) repackage the director’s life as a work of fiction. That lets them simultaneously tease and nullify a thought that viewers would have had anyway: How much of this stuff actually happened? And it lets them concentrate on a small number of milestone moments that have been reshaped for a Hollywood feature aimed at the broadest possible audience, and tie everything to two intertwined questions that any viewer can relate to: How do you define happiness? And is it possible to achieve it without hurting anybody else?

The answer, as it turns out, is no. All of the characters in “The Fabelmans” can be divided into three categories. Some people have found happiness. Some people remain unhappy because they aren’t bold enough (or ruthless enough) to take the steps necessary to become happy. And some people don’t think about happiness because they’re already happy. Sammy won’t be happy until he can fully commit to his art without having to think about other people’s feelings and wants.

Kushner and Spielberg shape a lot of the story into self-contained scenes with beginnings, middles, and ends, as in a stage play (although Spielberg doesn’t shoot anything in a cliched “stagey” way; on the contrary, he once again demonstrates what Orson Welles noticed about him early in his career: that he was the first major director whose visual sense wasn’t shaped by the proscenium arch). In the end, it all comes back to people figuring out who they are and then deciding whether to fully commit to the course they think will bring them the most happiness. 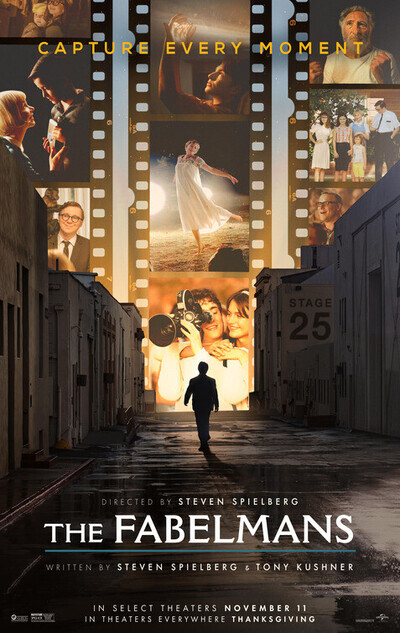 Rated PG-13
for some strong language, thematic elements, brief violence and drug use.