“V/H/S/99,” which premiered at the Toronto International Film Festival before a Shudder drop next month, is a vicious, angry movie. Perhaps it’s merely coincidental, but it feels intentional in the manner in which these found footage short films all seem to feature people, well, “f**king around and finding out.” Some have suggested that the film should have been called “V/H/S/Y2K” but I think it’s not for a reason. This is not about the launch of a new millennium—it’s about the end of an old one, a slammed door on irresponsible idiots, mean sorority girls, manipulative TV personalities, and more. As an overall film, I found it more inconsistent than the stronger reboot “V/H/S/94” as a few of the segments just don’t work, but I admired the angry yell that this film resembles as a whole, and I’m still in the camp that hopes they make a new one of these like every year.

The latest “V/H/S” opens with its worst segment—never a good thing for something trying to reach an audience on a streaming service like Shudder because they may jump off to something better quickly. Maggie Levin (“Into the Dark: My Valentine”) directs “Shredding,” which documents in nauseating shaky cam style a ‘90s group of troublemakers—think the pop-punk bands of the day with “Jackass” aspirations—who decide to break into an abandoned venue where a band named Bitch Cat was trampled to death a few years ago. One guess how that goes. It’s a cluttered, inconsistent, merely loud short that exists on the bottom tier of the “V/H/S” segments over the years. It has nothing to say even as it’s screaming.

Things improve greatly with “Suicide Bid,” helmed by Johannes Roberts (“The Strangers: Prey at Night”), the title referring to a sorority wannabe named Lily (Ally Ioannides) as she applies to only one Greek organization on her new campus, and it’s populated by just about the worst people in the world. They tell Lily that she has to survive a night buried in a coffin, relaying the legend of a girl who did this before and disappeared, taken off to Hell by a demon. The first half of this one is a little silly, but I really like the creature design in the second half as Roberts and his team have crafted a practical demon that’s pretty legitimately terrifying.

Flying Lotus takes over for the centerpiece, which will appeal enough to fans of the artist (and his previous work “Kuso”) enough to make it the fan favorite of this project. “Ozzy’s Dungeon” is the name of one of those abrasive kid game shows like “Double Dare” but with a twisted, violent edge. When a girl named Donna (Amelia Ann) is injured on the show, her mother (Sonya Eddy) kidnaps the host (an excellent Steven Ogg) and forces him to run a brutal gauntlet himself. Something about the pacing in this one is off to me as the gimmick wears off before it ends, but those who like their horror particularly grotesque should be entertained.

Tyler MacIntyre (“Tragedy Girls”) helms the modest but forgettable “The Gawkers,” which takes the concept of suburban perverts to extremes—again, almost all of these shorts feature someone who messed with the wrong person. In this case, it’s a bunch of sexually overcharged teens in an average cul-de-sac who lose their mind over the beauty of a new neighbor (Emily Sweet). They keep amplifying their voyeurism to the point that they literally install spyware and discover, well, she’s not your average girl next door. This segment is fine but it lacks the energy of the best “V/H/S” chapters.

My favorite is probably “To Hell and Back,” from Vanessa & Joseph Winter, who directed the SXSW hit “Deadstream,” which lands in theaters soon. The manic, Raimi-esque energy of that project is on display here in the tale of two filmmakers (Archelaus Crisanto & Joseph Winter himself) who decide to document a demon-summoning rite on New Year’s Eve and end up going the other way instead. In other words, instead of a demon coming to our world, these two mopes go to Hell. “A found footage movie set in Hell” is too clever a pitch to deny and the Winters have a blast in Satan’s realm, fueled by a fun performance from Melanie Stone as a tour guide of sorts through the insanity they find there.

“Suicide Bid” and “To Hell and Back” alone make “V/H/S/99” worth seeing for anyone who’s a big enough horror fan to subscribe to Shudder. In the end, these films are perfect for a streaming service, bite-sized jolts of genre entertainment that aren’t ever long enough to be truly annoying, even when they’re not working. And while I think they could be more refined, I admire the go-for-broke DIY nature of these shorts and their quirky charms. Even when they’re this pissed off.

This review was filed from the Toronto International Film Festival. It drops on Shudder on October 20th. 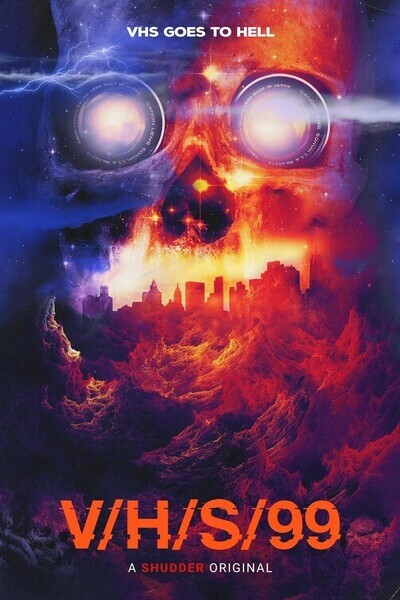 Writer (segment “To Hell and Back”)

How the ‘Crazy, Creative Minds’ Behind ‘Los Espookys’ Made Season 2 Even Weirder