Sounds of flesh being ravenously devoured permeate an early scene in “Bones and All.” Sparing us most of the visual horror, director Luca Guadagnino instructs the audience to look away from the grisly feeding. By pointing the camera at photographs of the victim, an elderly woman, on vacation or with her loved ones, he preserves her humanity. Though her lifeless corpse now serves as feast for two famished cannibals, her time alive mattered.

Photographic evidence of a person’s history becomes a strong motif in this beautifully voracious coming-of-age romance. These printed pictures, sometimes found in a car or tucked away in a drawer, provide a reminder of the many facets—for better and worse—a single induvial can contain: the perpetrators were once children, while their prey may in turn leave families behind. In every bite there’s a disturbingly intimate communion.

Ingesting people across state lines in the 1980s, Maren (Taylor Russell) finds herself on her own after her father runs away when she turns 18, only leaving behind a tape recounting her earliest episodes of cannibalism and her birth certificate. Their father-daughter relationship seems akin to that in the Swedish vampire dram “Let the Right One In.” The parent, aware of her urges, tried to prevent her from further acting on such hunger.

However, Maren, now out in the open world, learns that her desire for human meat is innate, an unexplainable trait she cannot change, only control. “Eaters,” as they refer to themselves, identify one another through their scent. But while some of these outsiders have rules that make eating others like them off limits, others follow a less scrupulous path.

Working from screenwriter David Kajganich’s adaptation of Camille DeAngelis’s novel, Guadagnino infuses the most gruesome aspects of the journey with an earthy atmosphere where a love story can flourish and not seem jarring. Swoon-worthy landscapes under purple skies—the heartland of America in all its raw, vast, and sparsely populated glory—become the Terrence Malick-friendly playground of conflicted lovers. Through the dexterous lens of cinematographer Arseni Khachaturan, the countryside mesmerizes.

The heartthrob at hand, Lee (Timothée Chalamet), an orange-haired eater who kills without remorse, comes across Maren while on his way to Kentucky, where the remnants of his previous life remain. Partners in crime who slowly transition into lovers fueled by youthful impetus, the two disagree on how to go about satisfying their needs.

A formidable Russell, who previously stunned in “Waves,” molds a performance in which Maren moves through her newly discovered horizons with both innocence and guilt. The timid trepidation of falling in love for the first time intermingles with the moral conundrum of her condition. In turn, her consciousness of the acts Lee rationalizes as inevitable without much thought for those who lose their lives so they can eat generates an ideological divide.

On the contrary, an infallibly charming Chalamet doesn’t much stretch his emotional range, but puts forward a familiar rehashing of other cool, but secretly tortured young men who have become a staple in his still nascent collection of roles in prestigious fare.

Then there’s the third key player in this “Nomadland” meets “Raw” trip: Sully (Mark Rylance), an odd eater that shows Maren the ropes at the beginning of her self-discovery as a cannibal. What renders Rylance’s supporting turn exceptional is that one never doubts Sully is a person that truly exists. There’s a lived-in quality in his bizarre mannerisms, his heavily decorated clothing, and other eccentricities. Blood-soaked, he shares with Maren the organic memento he carries around to keep tracked of those he has consumed.

Guadagnino’s frequent collaborator Michael Stuhlbarg and director David Gordon Green, in a rare acting part, show up for chilling cameos that further cement “Bones and All” as an amalgamation of the Italian filmmaker’s tales of amorous complications such as “Call Me by Your Name” or “A Big Splash” and his genre sensibilities put to the test in “Suspiria.”

Back to the significance of the photos that Lee and Maren encounter as they traverse several states over one summer: while these images reveal information on the people in them, they also lack depth and are limited in what they can tell us truthfully. That “Bones and All” opens with shots of paintings depicting landscapes that exists outside of the walls of Maren’s high school illustrate that these renditions are mere interpretations of reality. Likewise, the photos only capture a brief glimpse of a person and not who they are in full beyond the confines of that frame, and of the time it immortalizes. People change.

“Bones and All” plays out as a can’t-look-away, riveting experience for most of its running time. It’s easy to get entranced by its modestly sumptuous imagery, the believable chemistry of the volatile couple, and even the rattling bluntness of the graphic sequences.

But once the pair reach Maren’s original destination, Minnesota, and a confrontation with a family member ensues, the film loses steam that cannot be regained from the choppy flashbacks that saturate the final act of Guadagnino’s latest. Even the heart-to-heart confessional between the flesh-eating lovebirds, where they agree to try their hand at a peacefully mundane existence, feels as if it overexplains what was knowingly unspoken.

The takeaway of its metaphor, that there’s always someone out there who can empathize with one’s plight, is applicable to any of the many reasons why we may feel ostracized, desperate to leave home, or profoundly alone. Based on those philosophical preoccupations, as well as more obvious wordplay reasons, “Bones and All” could have just as easily shared a title with another fall season release: “All the Beauty and the Bloodshed.” 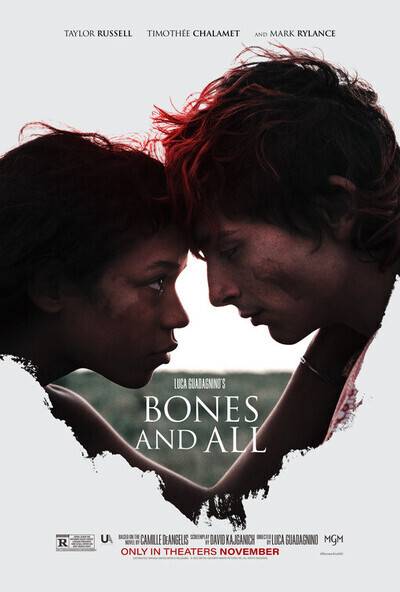 Writer (based on the novel by)