D.H. Lawrence’s novel does not start with plot points or scene-setting. Oh, no. In the opening paragraph, Lawrence bellows into a megaphone: “Ours is essentially a tragic age, so we refuse to take it tragically. The cataclysm has happened, we are among the ruins, we start to build up new little habitats, to have new little hopes. It is rather hard work: there is now no smooth road into the future: but we go round, or scramble over the obstacles. We’ve got to live, no matter how many skies have fallen.” Written in the aftermath of the first world war, with Europe in ruins, this passage was literally “words to live by”. To say it another way, Lady Chatterley’s Lover is not just a sexy love story. Yes, there is steamy infidelity but the real point (which was lost in the ensuing decades-long scandal surrounding the book) is integrating body and mind as a way of reconnecting to our purest impulses, and in so doing, maybe heal the whole world. Lawrence wore his Thomas-Hardy-Walt-Whitman influences on his sleeve. Of course, at the end of the day, the reason the book scandalized generations was because of all that throbbing pulsing sex, all those rising organs and enigmatic fluids, the Edenic orgasms, plus a couple of f-bombs (used as verbs, not adjectives, a crucial distinction).

Lawrence’s book has been adapted for screens big and small many times, to varying degrees of success. The plot is well-known and isn’t all that original (a rich woman hooks up with her manly gardener), and there are landmines everywhere in the material. If an adaptation just focuses on the hot sex, then you’re missing what Lawrence was really getting at: the “cataclysm” of war, the dangers of industrialization, the growing class conflict, the myriad ways humanity has suffered spiritually from prioritizing mind over body. This new adaptation, directed by Laure de Clermont-Tonnerre, avoids the landmines remarkably well. The film shimmers and breathes, leaving space for discovery.

Connie Reid (Emma Corrin) has a couple of love affairs under her belt when she marries Baronet Clifford Chatterley (Matthew Duckett), right before he heads off to fight in the Great War. Connie was raised in a modest slightly bohemian family, so becoming “Lady Chatterley” is a huge change. She is removed from London, from her sister Hilda (Faye Marsay), to live in the massive Chatterley estate. When Clifford returns home from the war, he is paralyzed from the waist down, and needs full-time care. Connie loves him and does her best. However, she’s a young woman with an impotent husband who shows no interest in getting creative about sexual pleasure. He wants an heir though, so he suggests she take on a lover, not for pleasure, of course, but for impregnation. Connie is devastated. She’s aching for affection and touch. Then she gets a glimpse of Oliver Mellors, the gamekeeper (Jack O’Connell). And with barely half a dozen words spoken between them, they hook up. He is not the aggressor or initiator. She is. He is more conscious of the class difference than she is. He calls her “m’lady” in a tone of deep respect and has a hard time dropping it after they’ve been intimate. The class awareness is engrained in him.

Before you know it, the love affair has heated up to such an extent that Connie’s hours-long “walks” might arouse suspicion. Clifford spends most of his time with business associates, discussing the protests erupting in the mines in their district. (An echo of Lawrence’s concerns about the damaging effects of the Industrial Revolution is present.) Clifford might not notice that something is going on with his wife, but Clifford’s nurse-maid Mrs. Bolton (Joely Richardson) certainly does. Her alert glances at Connie’s disheveled hair and glowing cheeks spark the film with dread of what will happen when this love affair is revealed, because of course it must be revealed.

With screenplay by David Magee (“Finding Neverland”, “Life of Pi”), “Lady Chatterley’s Lover” takes its time with all this. The lovers may have sex almost immediately, but after that, they’re on a path of discovery. The sex isn’t just sex, and this is one of the main accomplishments of Clermont-Tonnerre’s sensitive and even delicate approach, as well as the openness of Corrin and O’Connell. We live in a moment where grownup sex has practically vanished from the silver screen. There was a big Twitter “discussion” once about sex scenes, and a number of people agreed that sex scenes were only okay “if they advance the plot”. That should come as a surprise to “Don’t Look Now”. Human beings don’t have sex to advance the plot. Sex is a big part of many people’s lives. In “Lady Chatterley’s Lover”, the sex is not generic. It is specific to these two people, and the specificity makes it erotic. You don’t realize how rare something like this is until you see it done well.

The film was shot with a quicksilver freshness by Benoît Delhomme. There are no stately shots; there is nothing formal or slow. Instead, there’s lots of handheld camera work, lots of lens flares, the camera chasing after Connie as she jumps across the green fields. The woods where Connie and Oliver meet up are a primeval forest, where everything—even the light—has a tactile quality. Isabella Summers’ score enhances emotions instead of underlining them.

Both Corrin and O’Connell are marvelous here. Connie and Oliver have been struggling underwater all their lives, and they didn’t even realize it until they met. Now that they’ve met, they can finally breathe. The way Corrin and O’Connell slowly open up to each other, you can see the relationship deepening under their feet with every moment. This requires such openness and accessibility on the actors’ parts. Something like Lady Chatterley’s Lover requires the audience to be on the lovers’ side, even if what the lovers are doing is wrong. If it’s a doomed love, like Ilsa’s and Rick’s in “Casablanca,” you have to “buy in” to their connection, and weep when it cannot be. In “Lady Chatterley’s Lover,” ugly gossip starts to spread, and it’s painful to think of Connie and Oliver’s Eden being spoiled. This is due almost entirely to Corrin and O’Connell’s breathtaking open work with one another.

“Lady Chatterley’s Lover” is Laure de Clermont-Tonnerre’s second feature. Her first film was 2019’s “Mustang”, starring Matthias Schoenaerts as a prison inmate participating in a rehabilitation program involving the taming of wild mustangs. “Mustang” was one of the hidden gems of 2019, with Schoenaerts giving a great performance as a violent man filled with shame about his violent past. “Mustang” had the same tactile quality of “Lady Chatterley’s Lover,” and the same happening-in-real-time energy. You feel you are running alongside the characters, trying to catch up with them on their journeys forward. “Mustang” was a much smaller movie than “Lady Chatterley’s Lover,” although it had some very complicated elements, like all those wild mustangs. Clermont-Tonnerre handles the far more ambitious “Lady Chatterley’s Lover” with confidence and alive-ness, and if the film slackens a little bit when the gossip-y walls-closing-in scenes begin, it doesn’t take away from the main event: Corrin and O’Connell, lying on the grass in the forest, their bodies pale against the thick green, breathing as one. It’s sneakily profound. 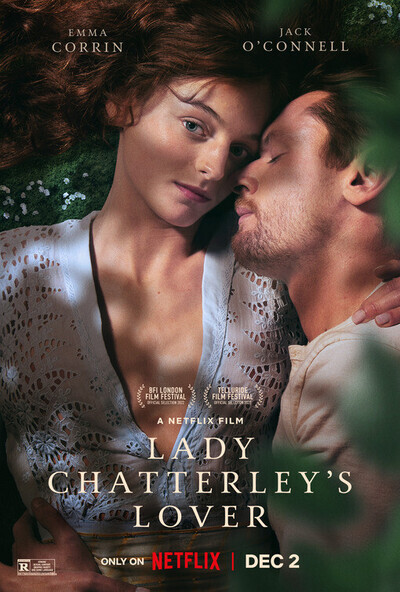 Writer (based on the book by)