We expect a lot from our celebrities. We want them to edgy enough to make us feel special. But we don’t want them to be so edgy that they offend someone. And if, God forbid, they do offend someone, we are quick to cancel them. Until we un-cancel them. The cheekily offensive Sex Pistols was a group so edgy they turned down the Rock and Roll Hall of Fame. But front man Johnny Rotten provided the voice of an Acoustiguide at the ultra-establishment Metropolitan Museum of Art’s British fashion exhibit. Ice-T’s “Cop Killer” song was so controversial that then-candidate for Vice President Dan Quayle denounced it. He is now beloved by the grandmothers who know him from “Law & Order: SVU.”

Sinead O’Connor has not had a second act of that magnitude, perhaps because she was not just unprepared for massive pop stardom but not really interested in it. A new documentary about the Irish singer informs us at the end that her still-massively popular version of the song by Prince that gives the film its title was not played in the movie because the Prince estate declined to give them permission.

No problem. That song is in our bloodstreams, and if we want to see the iconic video again we can always add to the over 300 million views it has on YouTube. It is more illuminating to see some of the outtakes and hear about what went on behind the scenes, including the director’s insistence on a woman cinematographer, Dominique Le Rigoleur, because he thought O’Connor would respond with more vulnerability looking at a woman.

“You fell in love with that tear,” someone says about the video. Importantly, although the tear was real—O’Connor tells us she was thinking of her late mother—the words were someone else’s. The fans who loved the song and wanted to hear more of the same as the worldwide success moved O’Connor’s tour from theaters to arenas, found that performing the songs she wrote accessed the anger she was not able to express off-stage. She tells us about the repressive, church-controlled Irish culture she grew up in, with women told to be sweet and accommodating and everyone told they were sinners.

She also tells us about her unstable and abusive mother, who beat her daughter and locked her out of the house, forcing her to be out all night, begging to be let back inside. O’Connor first began to sing as a way to “make the devil fall asleep,” to mollify and distract her mother. But she then declared her daughter “unmanageable” and sent her to the horrifically abusive institution exposed in the film “The Magdalene Sisters.” The nuns punished her by making her spend the night with elderly patients moaning for help that never came. Her song, “Troy” was inspired by her mother, “a testament,” she tells us, to work through her feelings until she will not have to sing it again.

O’Connor found success quickly. She had that extraordinary voice, with impeccable clarity and the ability to go from a whisper to a shout while staying in key. And she had that instantly iconic appearance, the androgynous contrast between her shaved head, leather jacket, and boots and her mesmerizing, long-lashed eyes.

She also became pregnant at 20, just as her album was released. The discussion of the label’s response to her pregnancy and the design of the album cover(s)—a less confrontational version for the U.S.—is one of the movie’s most powerful revelations.

This is not the typical “behind the music” documentary. It does not aspire to be comprehensive either as biography, as an overview of an entire artistic career, or as cultural commentary. There is no effort to cover O’Connor’s marriages, religion, name changes, her mental illness challenges, or even the last 11 albums she has produced. The focus is on what will be the first line of O’Connor’s obituary: on “Saturday Night Live” she sang a Bob Marley song about racism with lyrics based on a speech to the UN by Haile Selassie. And then she held up a photograph of the pope and tore it in half. The film reveals, as O’Connor did in her memoir, that her reason was as personal as it was political; that was the photograph that was on the wall of her mother’s home.

It caused a furor. The audience applauded when subsequent SNL host Joe Pesci says he would have smacked her. “Saturday Night Live” also had Phil Hartman as Frank Sinatra calling Jan Hooks as O’Connor a “bald chick.” Radio stations swore never to play her music again, and protests included a bulldozer running over O’Connor’s CDs.

Director Kathryn Ferguson and her co-writers Eleanor Emptage and Michael Mallie want us to think about the way O’Connor’s influence is reflected in today’s outspoken female performers, a legacy they consider more significant than the Prince song about lost love. A compilation of quick clips at the end is not entirely persuasive about O’Connor’s impact, but her story and her voice are impact enough.

Premiering on Showtime on September 30th. 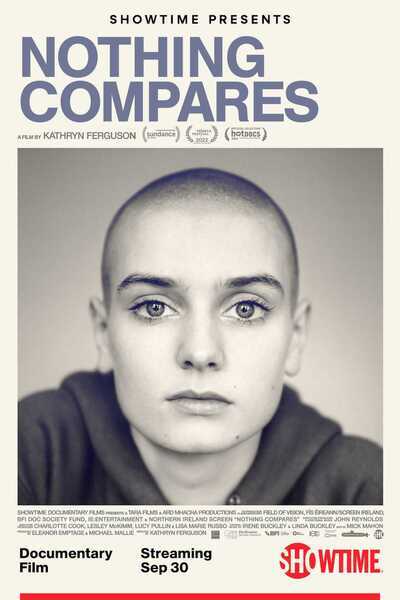 All the Beauty and the Bloodshed – New Movie Review