When the horror histories of the 2010s are written, the decade will be associated with trauma metaphors the way the ‘80s are with slasher movies. And although it comes on the cusp of a new decade, the new Paramount wide-release horror movie “Smile” fits right in with its PTSD-induced kin. The difference here is that the monster is barely a metaphor at all: The demon, or evil spirit, or whatever it is—the movie is vague on this point—literally feeds on, and is spread by, trauma.

Specifically, the vague something that dogs Dr. Rose Cotter (Sosie Bacon) throughout “Smile” likes the taste of people who have witnessed someone else dying by suicide—gruesome, painful, bloody suicide, by garden shears and oncoming trains and the shattered fragments of a ceramic vase in a hospital intake room. That’s where Rose briefly meets Laura (Caitlin Stasey), a PhD student who’s brought to the psychiatric emergency ward where Rose works, shaking and terrified that something is out to get her. “It looks like people, but it’s not a person,” Laura explains, saying that this thing has been following her ever since she witnessed one of her professors bludgeoning himself to death with a hammer four days earlier. At the end of the extended dialogue scene that opens the film, Laura turns to Rose with a psychotic grin on her face and proceeds to slit her own throat.

This would unsettle anyone, but it especially bothers Rose given that Rose’s own mother died by suicide many years earlier. That lingering trauma, and the fears and stigma that surround it, form the film’s most intelligent thematic thread: Rose’s fiance Trevor (Jessie T. Usher) admits that he’s researched inherited mental illness online, and harsh terms like “nutjobs,” “crazies,” and “head cases” are used to describe mentally ill people throughout the film. The idea that she might not actually be plagued by the same entity that killed Laura, and that her hallucinations, lost time, and emotional volatility might have an internal cause, seems to bother Rose more than the concept of being cursed. The people around Rose, including Trevor, her therapist Dr. Northcott (Robin Weigert), her boss Dr. Desai (Kal Penn), and her sister Holly (Gillian Zinzer), certainly seem to think the problem is more neurochemical than supernatural—that is, until it’s way too late.

The only one who believes Rose is her ex, Joel (Kyle Gallner), a cop who’s been assigned to Laura’s case. Their tentative reunion opens the door to the film’s mystery element, which makes up much of “Smile’s” long, but not overly long, 115-minute run time. The film’s storyline follows many of your typical beats of a supernatural horror-mystery, escalating from a quick Google (the internet-age equivalent of a good old-fashioned library scene) to an in-person interview with a traumatized, incarcerated survivor of whatever this malevolent entity actually is. Brief reference is made to a cluster of similar events in Brazil, opening up the door to a sequel.

“Smile’s” greatest asset is its relentless, oppressive grimness: This is a film where children and pets are as vulnerable as adults, and the horror elements are bloody and disturbing to match the dark themes. This unsparing sensibility is enhanced by Bacon’s shaky, vulnerable performance as Rose: At one point, she screams at Trevor, “I am not crazy!,” then mumbles an apology and looks down at her shoes in shame. At another, her wan smile at her nephew’s birthday party stands as both a bleak counterpoint to the sick grin the entity’s victims see before they die (thus the film’s title), as well as a relatable moment for viewers who have reluctantly muddled their way through similar gatherings in the midst of a depressive episode.

Sadly, despite a compelling lead and strong craft behind the camera—the color palette, in shades of lavender, pink, teal, and gray, is capably chosen and very of the moment—“Smile” is diminished by the sheer fact that it’s not as fresh a concept as it might seem. This is director Parker Finn’s debut feature as a writer and director, based on a short film that won a jury award at SXSW 2020. To spin that into a non-franchise wide-release movie from a major studio like Paramount within two years—in a pandemic, no less!—is an impressive achievement, to be sure.

But in padding out the concept from an 11-minute short into a nearly two-hour movie, “Smile” leans too heavily not only on formulaic mystery plotting, but also on horror themes and imagery lifted from popular hits like “The Ring” and “It Follows.” David Robert Mitchell’s 2014 film is an especially prominent, let’s say, influence on “Smile,” which, combined with its placement on the “it’s really about trauma” continuum, make this a less bracing movie experience than it might have been had it broken the mold more aggressively. It does introduce Finn as a capable horror helmer, one with a talent for an elegantly crafted jump scare and a knack for making a viewer feel uneasy and upset as they exit the theater—both advantages for a film like this one. But fans excited to see an “original” horror film hitting theaters should temper those expectations.

This review was filed from the premiere at Fantastic Fest. It opens on September 30th. 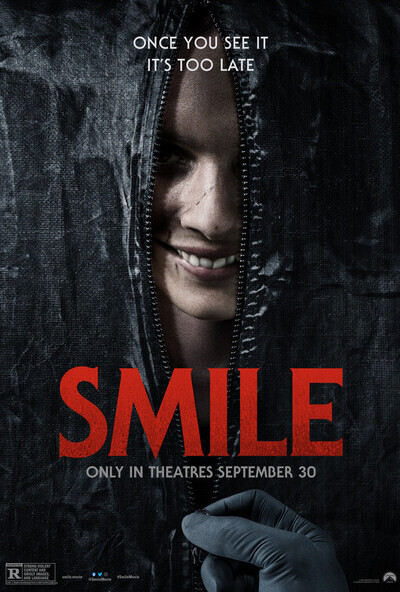 Bones and All – New Movie Review